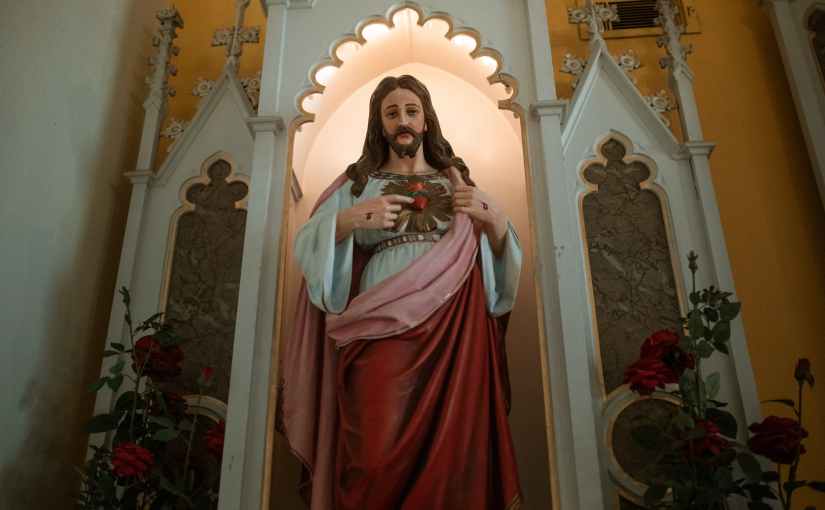 The Great Lover calls all of us

into the Ocean of Mercy called God:

“I did not come to make the virtuous

feel good about themselves,

I came for those who need healing.”

Once in the Ocean you can dive to the depths:

“There are two healing demands

if you take up the contemplative life:

and purifying your conscience of all sin

through the sacrament of reconciliation.”

– The Cloud of Unknowing

Both Christianity and Buddhism encourage people

to reject all earthly aspirations.

which works well for them

until there is serious suffering.

may be entering a spiritual wasteland

or travelling into a mythic desert

where they can start a new spiritual search

for the God old, ossified institutions have lost.

Perhaps religion is all made up anyway –

Alpha and Omega, Incarnation and Resurrection

as dominant myths to help us cope

with our Infinite God and infinite universe

even though God is fully present everywhere

including in your own heart and soul.

Though God is in, over, through, and as us

“We do not see things as they are,

we see them as we are. We hear religious texts

according to our own level of consciousness

which is always developing.” – Richard Rohr

the rise of the great religions, east and west.

with the labor pains of science –

a massive revolt against Aristotle

and his deductive method of arguing from effect to cause.

began to displace the science of God (theology) –

instead of the Author of Living Faith.

and been a handmaid of Spirit

rather than mythic freedom.

but must overlook the great pyramids

were built by slaves.

“The land of the free

and the home of the slave.”

but the Spirit brings democracy and real liberation.

With real liberation has come

denying all desires and pleasures.

God has designed us so that

certain desires and pleasures are natural for us –

to be human is more godly than to be angelic.

The lingam, the giant stone phallus in Hindu temples

and is an all-encompassing symbol

representing a multitude of ideas and emotions

which have little to do with penises and sex.

represent many ideas and emotions other than

but courage may require the Cross in your own life –

sacrificing other essentials such as pleasure or happiness

or even your life.

When you accept that ‘everything belongs’

you can accept suffering and death –

only the ego fears suffering and death –

whereas your true life, your soul

is hidden with Christ in God

and All things, even death, work for the good

for those who love the Great Lover.